Posted by Admin DocuFilm on 7/10/11 • Categorized as Hungary,Queer-LGBT 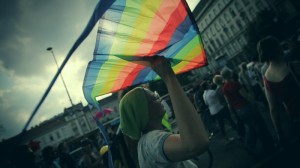 BUDAPEST (Hungary). Thousands of people demonstrated in Budapest on 18 June against discrimination of gay, bisexual and transgender people. Unlike the demonstrations in Split (Croatia), Warsaw (Poland) or Macedonia there were no serious problems during the march with right-wing counter-protesters on Budapest Pride 2011. But this was only the case because it marched inside a zone, permanently and rigorously guarded by police and security and subsequently left isolated. Right wing provocations manifested itself in the form of several hundred right wing activists gathered at Oktogon (which is in the middle of the pride’s route). 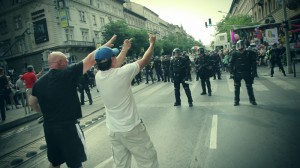 Although police forces protected the Pride from right-wing attacks it is also clear that we can’t rely on their good will. Not only had the Pride been previously banned and then only finally allowed some days before, but the protesters were criminalized from the very beginning. A group from Vienna was restrained for hours after the march, after they had been attacked by right wing thugs on their way to the bus. Although there were several assaults after the demonstration, the Pride’s organisers didn’t seem to have any clear counter strategy how to deal with the situation. 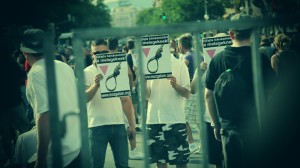 The police used one of their well-known strategies during the weeks previous to the pride. The long route (from Heroe’s square to Andrassyroad to the parliament) was forbidden in the beginning of 2011. The police said that this was because the pride would disrupt traffic circulation. The real reason for this was the political pressure from conservative and right wing extremist forces to keep the parade as far away as possible from public view. Only shortly before the beginning of the demonstration the ban on this route was lifted. 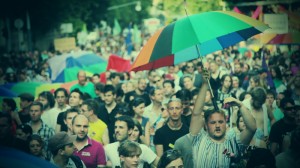 But the next provocation was to follow. The day before the pride the police informed the participants that any behaviour that might offend public decency was forbidden. This strategy isn’t new to the Hungarian agencies either. While the parade is suspected to break the law from beginning, right wing extremists are allowed to march and provoke the parade without similar warnings or penalties. It’s obvious that this preventive condemnation of the pride’s participants is not about breaking the laws. It’s about maintaining the dominant attitudes of a conservative-bourgeois family moral that tries to ban from public deviations from their ideal role models.
text source:
http://www.fifthinternational.org/content/budapest-pride-2011-report