Posted by Admin DocuFilm on 10/23/11 • Categorized as Switzerland 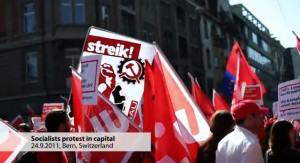 Organisers said 12,000 people had marched through the city centre to a rally on the square outside the parliament building.

The demonstration was called by the Unia and Syna trades unions to strengthen their position in negotiations for a nationwide labour contract. The current deal with the Swiss building entrepreneurs’ association expires at the end of the year.

Their main demands are for wages to be paid in full in case of illness and accident, rather than at the rate of 80 per cent as at present, for better job protection for older workers and union activists, as well as for measures against wage dumping.

The unions say the building industry increased its turnover by 3.1 per cent last year, although it employed 3.5 per cent fewer workers. They want employees to benefit from the boom in the industry though wage rises and an increase in minimum pay.

Hansueli Scheidegger of Unia said the employers were dragging out discussions, and warned that if necessary the construction workers were prepared to go on strike

For their part, the employers have said it needs more time to hammer out an agreement, and they have offered to extend the current one for six months. They have accused the unions of unwillingness to compromise.
text source